Using the STU transport system for site-to-ship transport of coal/ore has great benefits: Here are just a few:

This is not some pie-in-the-sky concept that someone has dreamed up. The STU technology has been developed over 30 years, and includes well over 100 discreet inventions and 41 international patents.

The STU technology has been independently assessed by 14 international experts, including 2 from the United Nations.

Let's have a look at a mining STU system...

In the example to the right, the system is capable of transporting coal/ore at more than 4,000 tonnes per hour.

The anchor supports and supporting masts are between 10 - 30 meters high. 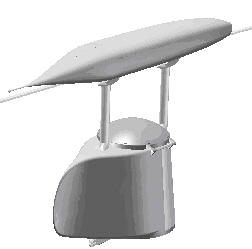 Transport of coal/ore is accomplished by multiple STU transport modules operating between the loading and unloading stations.

Each STU Transport module is capable of transporting 10 tonnes.

The modules are powered by 4 independent electric motors, each driving 1 of 4 separate wheels. The freight compartment has a volume of 7.5 cubic meters, and is hermetically sealed.

The top hatch is opened mechanically by a special lever to load the coal/ore. Once the coal is loaded, the hatch closes and is sealed.

At the unloading point, another lever is activated allowing the rotary hatch at the bottom to open under the weight of the coal/ore. Once the module is unloaded, the hatch automatically closes and seals.

For systems that involve transport to ships, the STU rails can be constructed out into the ocean to a location that is deep enough for ships to berth. A simple berth and surrounding break-walls are all that is required to load the coal/ore into ships. There is no need to construct expensive coal loaders, so the coal can be loaded directly from the mine into the ship at up to 4,500 tonnes per hour.

Each module has a simple control system that controls the distance (approximately 150 meters apart) and the relative speed to the next module (maximum of +/- 5 kph).

There is sufficient propulsion power so that the module can still operate with 2 of the motors not functioning. If the complete module fails, the next module has sufficient power to transport its load and the load of the failed module.

The modules can be powered by on-board diesel generators or through an electrical contact system in the track.

Each module is equipped with a GPS-based positioning system.

All on-board control systems are duplicated for additional reliability.

Overall control of the system is achieved from the control center that can be located at any location along the route. Because of the inbuilt communications between the modules and the control center, it is possible to know the exact location of every module.

If you would like to know more information, please don't hesitate to contact us. We will be happy to investigate whether the STU system would be suitable for your application.