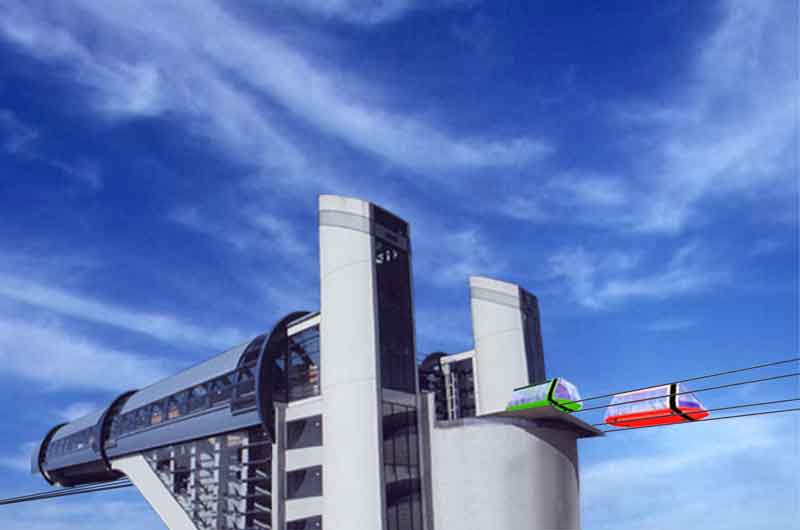 Although the STU system has several variations suited to different applications, the central core of the system is a patented track system that is comprised of high-tension steel ropes encased in a continuous steel casing. The whole system comprising over 100 inventions is covered by 41 worldwide patents.

There are single-rail and dual-rail systems, and there are high-speed and low-speed versions. However, all the variations are built around the same "String Rail" track.

We will describe each of the main components below.

One major features of the system is that it is elevated above ground level.

From a distance, the single-rail system looks much like a cable-car, but it is much different. The STU modules run on a single track that is far more rigid than a conventional steel cable. This means that modules passing over support towers feel more like a bus going over a hill rather than the usual "bumps" experienced with cable cars.

Dual-rail systems look like railways that are elevated 6 - 10 meters above ground. The main visual difference is the low-impact construction. Whereas a traditional elevated rail system would require heavy supporting infrastructure, the STU system supports are very small.

One of the main benefits of being elevated is that it improves efficiency at high-speed because it eliminates much of the air resistance associated with the vehicle / ground interface.

Another major benefit is that it improves safety drastically because many accidents in other types of transport are caused by collisions with people, animals, other vehicles or other objects at ground level.

Lastly, by being elevated, it significantly reduces the amount of land disturbance that occur with the construction of other transport systems.

The STU Track and Supports 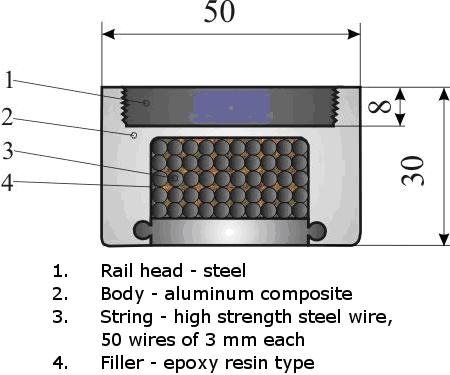 The string rail track combines the flexibility of a string with the rigidity of a steel beam to provide smooth movement of the wheel on the rail.

The string rail is made up of four main components. The heavy-duty single-rail is shown at left for example. The tensile strength and flexibility comes from the multiple steel ropes in the central part of the rail. The body is made up of an aluminium composite, filled with an epoxy resin filler. Lastly, the rail head is made of steel which is welded as one continuous unit to provide a smooth surface for the wheels to ride upon.

You can also view a computer simulation showing construction of a dual-rail system.

Maximal string rail tension per rail is 50 - 500 tons depending on the span length, mass and travel speed of the rolling stock. A string-rail is unique in that it combines the qualities of a flexible "string" (over the large spans between supports) and a rigid beam ( ie directly under the module wheel and above the support) ensuring a smooth, shock-less movement of the wheels both in the middle of a span and above the supports.

A string-rail is characterized by its high strength, rigidity, smoothness, low material consumption and wide range of operating temperatures (-70 C° to +70 C°). The lack of joints along the whole length (a rail head is welded as a single continuous beam) provides an ideally smooth surface for the wheels.

Cross-sectional dimensions of a string-rail are close to those of a railway rail, but uses less metal in construction than a railway rail. Design tension in a STU rail depends on the mass of the rolling stock and its design speed as well as the span length.

In the case of dual rail systems, the structural sag of the steel ropes plus the deformation caused by a UniBus load in each span is enclosed inside the rail body resulting in the rail head having minimal sag as the module passes over it. In fact, the design ensures that UniBuses will not experience vertical radius of less than 500m, 5,000m or 10,000m for travel speeds of up to 100 kph, 350 kph or 500 kph respectively. The resultant vertical acceleration within the UniBus will be within the range of 0.5 m/sec2 - several times lower than in railways.

Anchor Supports are installed at intervals of 500 - 5,000 meters, and are used to anchor the horizontal loads experienced by applying tensions of up to 500 tonnes.

Supports can be made of reinforced concrete (assembled or monolithic), steel welded structures or high-strength aluminum alloys. Depending on soil quality, foundations of supports could be piled or slab (monolithic or assembled). Supports together with the solid string-rail form a rigid framework structure Therefore, their load-bearing capacity is increased by 8 times compared with a monorail. This results in a corresponding reduction in construction cost.

If the STU supports were replaced by an embankment of a similar height its cost would be far higher than that of the supports. The optimal supports height is 5—6 m. If necessary, they can be reduced at certain sections of the route to 1 m and less or increased to 10—50 m.

For single-rail STU systems, the anchor supports can be high-rise buildings up to 3,000 metres apart.

Supporting masts are installed every 30 - 40 meters to provide support for the vertical loads.

Stations and Other Infrastructure 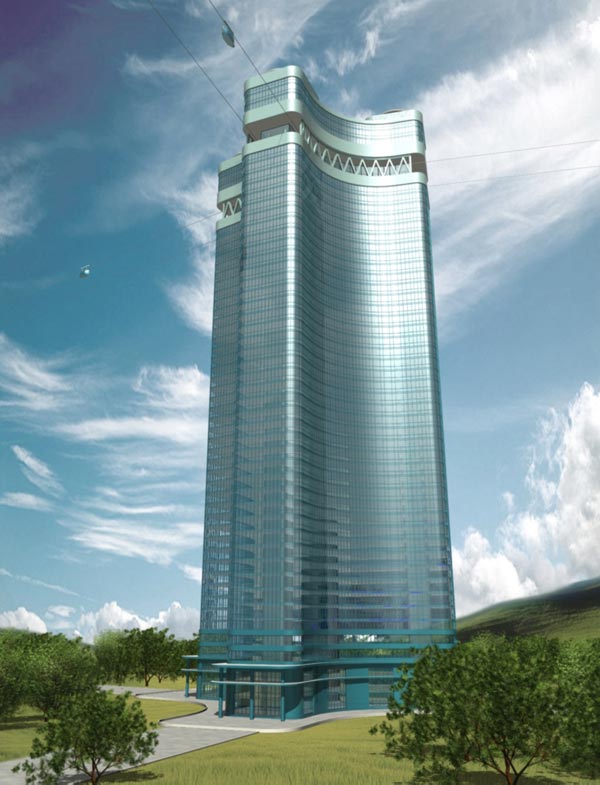 On the right is an artist's impression of a station building, where the remainder of the building is used for office space.

At the top of the building is the actual STU passenger platform, accessible by lifts in the building.

For dual rail passenger STU systems, stations are usually independent buildings, although they can be integrated into other buildings if desired. In this case, the passenger platforms are located just above street level.

An example shown to the left illustrates a 2-level station at the intersection of two dual rail STU routes.

The compact UniBus design makes it possible to reduce the size, and consequently, the cost of terminals, stations and platform length by 5—10 times compared with railway transport.

The Wheel and Suspension

The wheel is constructed of high-strength steel or high-strength light alloy. Whereas a conventional railway wheel has one flange and a conical bearing surface, the STU wheel has anti-derailment side rollers. 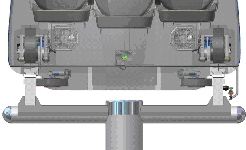 Although the STU wheel costs less than a car rubber tyre, it will last 5 - 10 times as long.

The module body can take various forms - depending on the application.

The STU UniBus module can be powered by an electric motor or an engine using various fuel types including diesel, gasoline, natural gas, etc.

Electric motors can get their energy from on-board power modules such as batteries or from external sources if the system is electrified.